The city is renowned for its rich heritage and culture. The Jaipur Walled City was recently recognized as a World Heritage Site by UNESCO.

On this day, the people, tourism department and many organizations celebrated Jaipur Foundation Day by organizing many cultural programs in the Pink City. The foundation day started with the program Mystical Tunes at the Statue Circle. An event named Mystical Tunes was organized by a civic body in the Heritage Building of Rajasthan School of Art and Craft at Kishanpole Bazar. Dance and songs were performed on the tunes of bands. Jaipur Municipal Corporation organized a classical dance program at Aradhya Govind Devji Temple.

The founder, chairman of the council, Vijay Pal Kumawat, General Secretary Ajay Vijayvargiya and member Kedar Sharma honored the statue of Jaipur founder Maharaja Sawai Jai Singh with a garland. Council members also cut the cake organized by Jaipur Marathon at the Albert Hall in Jaipur. Many talk-shows and competitions were also organized in schools.

The program started with worshipping the Ganesh idol by Sundar Band at Gangapol. The band played the Rajasthani song ‘Padharo Mhare Desh‘. The participants danced to several traditional Rajasthani songs. In the event organized with Vinod Joshi, classical singer Samarth Janhvi of Udaipur also performed. Kathak was organized at the Aradhya Govind Dev Ji Temple in Jaipur. Kathak dance guru Dr. Swati Aggarwal of Jaipur and many other artists created a beautiful description of Krishna’s form with dancing postures.

A large number of domestic and foreign tourists participated in the event. Mayor of Jaipur, Vishnu Laata along with many councillors and officials were also present. 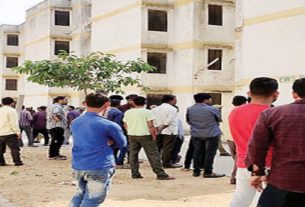 A new Tourist Safari to be developed at Galta forests


Jungle corridor for leopard habitat to be built in the Galta forest area, Jaipur will now be the first city to have 4 jungle safaris.