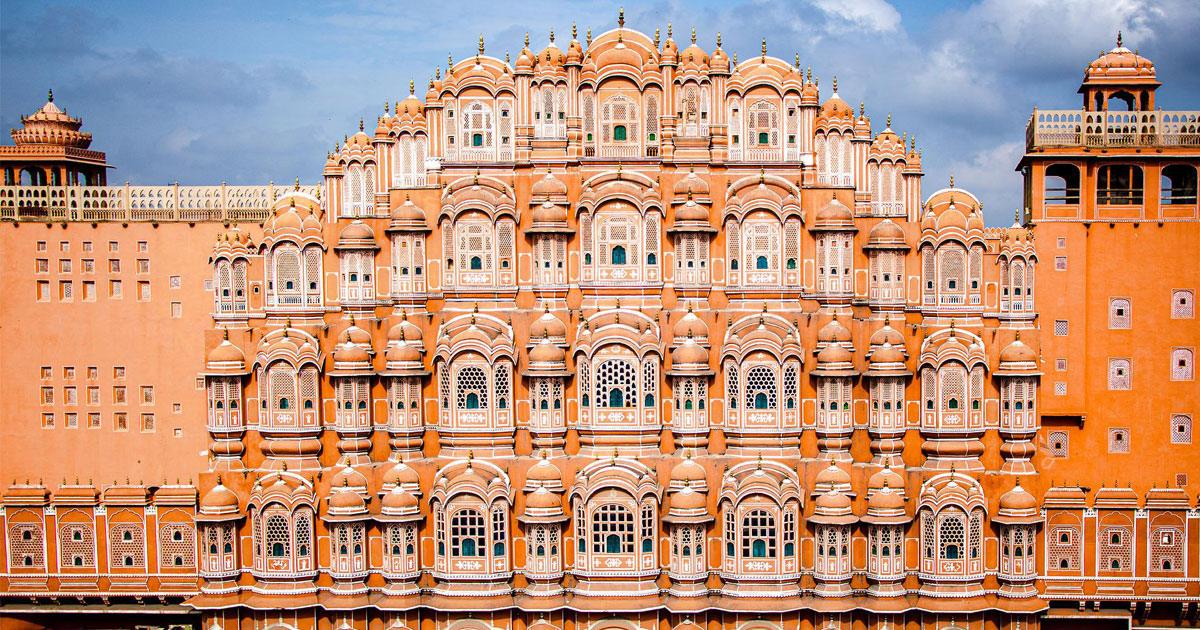 The Pink City of Jaipur is essentially famous for its distinct architectural marvels marrying the heritage and culture with myriads of customs and traditions. The incredible monuments of this regal city are a chance to get an insight into the life and works of the former Kings and Queens. For history buffs, the historical edifices are the best places to get a look at the expressions and articles of the earlier period. One such exceptional aggregate of the Kings which can’t be found at any other spot is Hawa Mahal. Highly popular among tourists, Hawa Mahal and the major landmark of all the prominent architectural wonders of the colorful city, Jaipur.

The ‘windy’ Hawa Mahal quite literally means “The Palace of Winds” and continues to be a fitting vernacular response to Jaipur’s harsh climate. The name often makes one wonder why it was named so and is there any purpose Hawa mahal was built for?

Hawa Mahal is a lot more than what we have known than its front view. The artistic structure has a much more interesting side. Till now we have known the facade that faces the road in the market area. This facade is what we usually have come across in pictures.

Well, the Hawa Mahal gets its name from its fifth floor which is popular as “Hawa Mandir“. The palace has a lattice window-ed façade which allows the breeze to keep the internal spaces cool in the hot summers, keeping the palace as breezy as possible. One can feel the draught of cool breeze in the entire palace even in the desert heat. And thus it was aptly named Hawa Mahal.

Here’s a little more information we found in Jaipur history. Let’s know more about the Hawa mahal inside and explore the unexplored.

Hawa Mahal built by Kachwaha ruler of Jaipur Maharaja Sawai Pratap Singh of Jaipur is a unique structure that dates back to the 18th century. The king got the inspiration to commission the Hawa mahal from a palace situated in the city of Jhunjhunu called Khetri Mahal. From the time of creation in 1799 to this very day, it is bearing the glory of royal families and the testimony of their power and beauty.

Why was Hawa Mahal built?

Although it is termed as Mahal, the building was never meant to serve as a residence. Hawa mahal was majorly a vantage point for Rajput women to observe the city life around without being seen themselves.

The five-story building is quite shallow, with the top three stories being barely a room deep and containing chambers in which the women sat. It was just built as an extension to the women’s chambers of the city palace, intended as a viewing screen.

In those times, the Rajput women were forbidden to appear in public and couldn’t roam outside like common people. The upper floors of the palace with small windows and protected balconies used to give a view of the outside world to them to catch glimpses of royal ceremonies and everyday life in the bazaar of the street below, without being visible from the outside. Hawa Mahal provided those women with a sense of independence while maintaining purdah or veil.

As going with the legends, Sawai Pratap Singh was a loyal Krishna devotee and so the architecture of the Hawa mahal resembles the shape of the crown of Lord Krishna. Therefore, the palace is dedicated to Radha and Krishna, with there being a room on each floor dedicated to the god.

The first floor has Sharad Mandir while on the second floor exists the Ratan Mandir with colorful glass work. Vichitra Mandir, Prakash Mandir, and Hawa Mandir adorn the top three floors. Vichitra Mandir or the strange floor was the favorite spot of Sawai Pratap Singh, where he spent hours sitting, praying to his favorite deity, Lord Krishna, and formulating poems in praise of the Lord.

You can also read: Sheesh Mahal Jaipur: Know everything about the Glass Palace

How to get to the Hawa Mahal

Standing upright at the heart of Jaipur, this structure is in one of the prime areas of Jaipur. It rests at Badi Chaupar, inside the City Palace premises. You have to enter the Hawa Mahal complex from the rear side entrance of the City Palace through an imposing door, Anandpoli Gate. As you step in, you will arrive at another gate called Chandrapuli Gate. When you enter this gate, a beautiful courtyard s you with a fountain at its center. There are two-storied buildings on three sides. Hawa Mahal is on the east side. It is basically an extension of the Janana or women’s chambers.

The architecture of Hawa Mahal is mainly indicates the Rajput style of architecture, but it also has very strong Mughal influences manifested in the harmony of its facade. The Hawa Mahal is a fascinating rose-tinted palace with a 50 feet high facade. It has more than 950 intricately carved small windows highlighted with brilliant latticework and motifs in white limewash which reflect the sheer magnificent architecture preferred by the royal families. These windows commonly known as the “Jharokhas” enhance the beauty of the palace. There are screened balconies and arched roofs having hanging cornices, which adds an extra beauty to the Mahal. The layout of the palace also looks like a honeycomb hive or a pyramid-shaped structure.

As mentioned, the architecture of Hawa Mahal is a beautiful amalgamation of Hindu, Rajput, and Mughal styles. The Rajput architecture can clearly be seen in its fluted pillars, floral patterns, lotus motifs, and canopies symbolize while the Islamic style was embodied in its filigree work, arches, etc. Nevertheless, the combination is a visual delight making you want to spend hours engulfing the architecture and magnificence of Hawa Mahal. Over time, it has become one of the best tourist attractions in Jaipur.

Of all the architectural marvels of Jaipur, the Hawa Mahal serves as a major milestone and is among the best places to visit in Jaipur. Take time to appreciate the craftsmanship of this spectacular monument.

Hawa Mahal is an extraordinary pink-painted instance of the visual language of the “Pink City”. The top of the palace offers a brilliant view of the City Palace, Jantar Mantar, and the ever-busy Sri Deori Bazaar. Through the windows, it offers visitors panoramic views of the city and surrounding areas.

There is a small museum in its premises, behind the Hawa Mahal, adjoining the Pratap Mandir. This museum dates back to the year 1983. It holds some rich relics and ancient artifacts of Rajput rulers such as miniature paintings and ceremonial equipment.

Other than this, tourists can indulge here in shopping. There are shops and various stalls lined up in the nearby streets of Hawa Mahal. So, shop till you drop into the famous markets of Jaipur where you will get souvenirs like handicrafts, clothes, bags, footwear, jewelry, and so on. Do not forget to try your bargaining skills.

Many people choose to visit restaurants near the Hawa Mahal so that they can get some great pictures insta worthy pictures of their own pictures with the famous facade of the Hawa Mahal as a backdrop.

Hawa Maha facts you must know

Things to Do at Hawa Mahal

Other than admiring the craftsmanship of this spectacular monument tourists can indulge here by shopping. Shop till you drop at the streets of Jaipur and its various stalls and shops nearby. You can get souvenirs like handicrafts, clothes, bags, footwear, jewelry and so on. Also, remember to try your bargaining skills as well.

A few tips for travelers

▸Avoid planning your trip on Fridays, as the museum inside the Hawa Mahal is not open on Fridays. So, it is best to plan a trip on other days so that you don’t miss out on it.

▸The Hawa Mahal entry is free on four days of the year, Rajasthan Diwas on 30 March, World Tourism Day on 27 September, World Heritage Day on 18 April, and International Museum Day on 18 May.

▸Wear comfortable shoes when you visit Hawa Mahal as you will have to walk quite a bit and even climb many stairs.

▸The construction of Hawa Mahal is ancient style and there may be many low walls and narrow walkways. So, walk carefully and follow the safety instructions.

You can buy a single ticket to Hawa Mahal as well as club your visit with other nearby destinations. For this, there is a composite ticket valid for two days that will cost:

Are there guides available?

Yes, you can easily get guides at Hawa Mahal. However, you won’t need one, as Hawa mahal is an architecture to walk around and admire its beauty. If you still feel the need for a guide, fix the price first.

For visitors, the Hawa Mahal timings are from 9 AM to 5 PM. It will take an hour or two to completely explore the wonderful edifice.

The best time to visit Hawa Mahal is between September to February. Early morning is the best time for Hawa Mahal tourism when the sun’s rays fall on the structure. The light enters the rooms from the windows and illuminates the Mahal with a golden glow and pink hues. Moreover, in the early morning, you get time to look around peacefully as later into the day, you will find so much crowd on the streets.

From Airport: Jaipur airport to Hawa Mahal distance is 13 km and the easiest way to reach here is by a cab which takes about 30 minutes to reach.

From the Railway station: You can either take an OLA or UBER or catch a minibus to Badi Chaupar for Hawa Mahal. Jaipur railway station to Hawa Mahal distance is just a 12-minute ride. 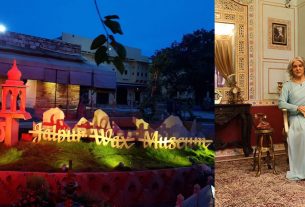 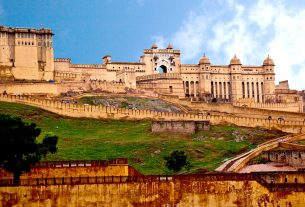 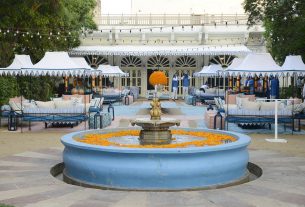 Bar Palladio: An essential Jaipur experience with a glimpse of Italy


Palladio is one of the best-designed bars in our country having its status as a global design icon. A must-visit spot when you're in Jaipur.